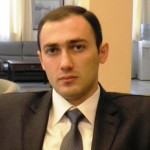 In 2001-2006 he studied and graduated from the Faculty of Foreign Languages, then the Faculty of Linguistics and Intercultural Communication of Yerevan State Linguistic University after V. Bryusov, and was qualified as specialist of French and Political Science.

In 2006-2008 he studied as a post graduate student in the Department of Political Science at the Institute of Philosophy, Sociology and Law of National Academy of Sciences of the Republic of Armenia.

In 2008-2010 he was the Scientific Secretary of the 062 Scientific Board on ”Sociology and Political Science” of Higher Attestation Commission of the Republic of Armenia.

He is a member of Midwest Political Science Association (USA).

He is a member of International Political Science Association (Canada).

He is author of five monographs, several scientific articles and publications.